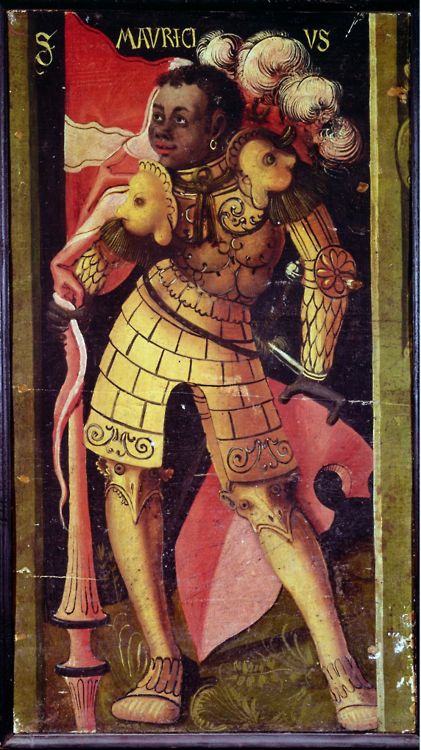 THE STORY OF ST MAURICE & THE THEBAN LEGION

During the Middle Ages Maurice became one of the most popular saints in Western Christendom, particularly in Germany and Switzerland, where he was venerated as the patron saint of soldiers, armies and the Holy Roman Emperors. St Maurice's sword, spurs and lance were used part of the imperial coronation regalia for almost 1,000 years and numerous churches, abbeys and even an order of chivalry were named in his honour.

According to legend, Maurice was a Nubian (his name is supposedly derived from the Greek word for black) from the upper reaches of the Nile. He was born in AD 250, during the reign of the Roman Emperor Decius, in the Egyptian city of Thebes and though this was the time of the 'Decian Persecutions', Maurice was baptised.

Thebes was a garrison town that guarded the Roman province of Egypt's southern border with the desert kingdom of Nubia. When he grew to manhood Maurice became the commander of the 'Theban Legion' which, though most Roman soldiers worshipped pagan gods such as Mithras or Sol Invictus, was composed entirely of his fellow Christians. However their faith would be severely tested when the new emperor Maximian ordered Maurice to march his legion to Gaul to put down a revolt of Burgundian tribes.

The Thebans obediently marched from the deserts of Africa to the mountains of Gaul and successfully crushed the rebellion but when the emperor ordered them to give thanks for their victory by sacrificing to Mars, they refused. To avoid any taint of idolatry Maurice withdrew his men to the Alpine town of Agaunum but Maximian gave chase and attacked their camp with his loyal, pagan, legions.

Though the Thebans surrendered without striking a blow against their comrades-in-arms, Maximian arrested the entire Christian legion and ordered one third of their number to be beheaded but he offered to spare the others if they made the required sacrifice. Still the Thebans refused to renounce Christ, so Maximian ordered a third of the survivors to be executed. The grisly cycle was repeated until all 6,666 Thebans, including Maurice, were dead.

Later, a shrine and an abbey were built over the site of the Theban Legions' martyrdom and Agaunum (now known as St. Maurice-en-Valais) became an important place of pilgrimage for the early German kings and later the Holy Roman Emperors. Over time the saint's sword, spurs and lance were transferred to the imperial cities of Magdeburg, Nuremberg and finally Vienna where they can still be seen though another sword of St Maurice is on display in Turin.

Magdeburg Cathedral has a stone statue of St Maurice, wearing medieval chain mail, which dates from the 13th Century but perhaps the most famous depictions are the early 16th Century paintings by Matthias Grunewald and Lucas Cranach the Elder which both show the saint in the full pomp of late medieval knight. Maurice was also the inspiration for Prometheus, the Nubian character in The Devil's Lance and the other books of The Devilstone Chronicles.

Go to The Life of St Longinus Page 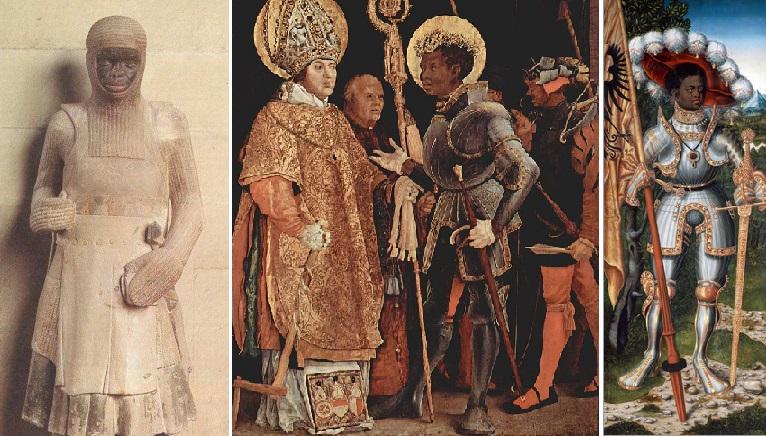