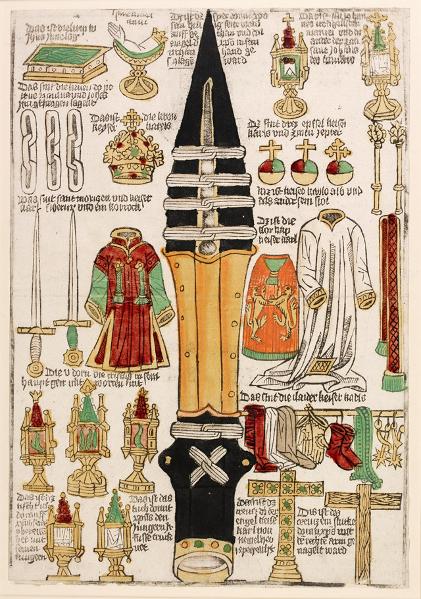 The Holy Lance & the Imperial Coronation Regalia depicted in a souvenir drawing sold to Medieval pilgrims.

Thomas has not fared well since he led the men of the Devil's Band to victory at the Battle of Pavia. In the days since that momentous triumph, he has quarrelled with his companions and decided he would fare better alone.

Having left  Bos, Quintana and Prometheus in Northern Italy, Thomas has travelled north in the hope of returning to England but he finds himself trapped in the bloody maelstrom known to history as the Great German Peasant's War. Forced to take service as court astrologer to Goetz of the Iron Hand, one of the many feuding robber barons of the Rhineland, Thomas' fortunes go from bad to worse as he finds himself besieged in his master's grim Castle of The Hornberg and Goetz blaming his foreign sorcerer for his all own misfortunes.

Once again Thomas is forced to used his wits and knowledge of the occult to bluff his way out of a death sentence yet he finds no safety outside the walls of the castle. Lurking in the forests beyond The Hornberg are riders from the mysterious Order of the Dragon but he is saved from being butchered by his erstwhile companions.

The presence of Bos, Prometheus and Quintana in the forest is no accident. They have been commissioned by Julius Caesar Scaliger, a celebrated Italian alchemist and student of the occult,  to find  Thomas and bring Christendom's most famous necromancer to the Castle of Wewelsburg. Here Scaliger reveals that he wants Thomas to commit one of the most daring robberies ever attempted.

In return for wealth beyond the dreams of avarice, Scaliger offers Thomas and the others the chance to steal the fabled Holy Lance of St Longinus.  This sacred spear was used to pierce Christ's side as he hung on the cross and, because it is said to bring victory in battle, it has become highly prized by kings and emperors. Christendom's most precious relic is now in the possession of the Holy Roman Emperors, and kept in the imperial capital Nuremberg, but Scaliger insists his motives for the theft are entirely honourable.

According to Scaliger, stealing the 'Spear of Destiny' is the only way to protected it  from the sinister Lord Dracul, deposed heir to the throne of Wallachia and grandson of the infamous Vlad the Impaler, who wishes to use its occult power to make himself master of the whole world. Thomas and the others readily agree to undertake this quest but all is not as it seems...