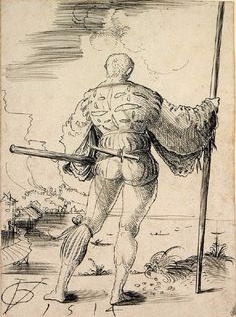 THE BADDEST OF RENAISSANCE BAD BOYS

THE LIFE & ART OF URS GRAF

In the 1949 film classic The Third Man, the villain Harry Lime (played by Orson Welles) makes this memorable speech:

“Don't be so gloomy. After all it's not that awful. Like the fella says, in Italy for 30 years under the Borgias they had warfare, terror, murder, and bloodshed, but they produced Michelangelo, Leonardo da Vinci, and the Renaissance. In Switzerland they had brotherly love - they had 500 years of democracy and peace, and what did that produce? The cuckoo clock. So long Holly.”

This speech, from a screenplay by UK novelist Graham Greene, was intended to provoke a debate on whether war creates virtue by inspiring great art but it actually does Swiss military history a great disservice. Apart from the fact that the cuckoo clock was invented in Germany, Switzerland’s now famous neutrality only dates from the 1815 Treaty of Paris, which ended the Napoleonic Wars.

In fact, during the late Medieval and Renaissance periods, the Swiss cantons produced some of the very best soldiers in Christendom and among their ranks was an extraordinary artist called Urs Graf. Graf [1485-1529?] was a contemporary of the great Renaissance artists, such as Leonardo de Vinci [1452-1519], Michelangelo [1475-1564] and Albrecht Durer [1471-1528], but if his work is little known today it’s perhaps because his art depicts the darker side of Renaissance life.

Instead of painting portraits of rich noblemen and their elegant ladies, or decorating churches with edifying scenes from The Bible, Graf’s drawings feature grotesque characters and nightmarish scenes drawn from his own violent, alcohol-fuelled life. Although he was married to a Basel blue-blood named Sibylla von Brunn, whose parents disinherited their wayward daughter, Graf spent much of his life in the underworld inhabited by thieves, harlots and soldiers-of-fortune. Moreover, his drunken, hell-raising frequently led to spells in prison, so where did it all go wrong?

Graf was born in the Swiss town of Solothurn and he spent his early years training to be a goldsmith like his father Hugo. As a young man he travelled to Strasbourg to learn the art of making woodcuts and by 1509 he’d earned enough money to buy a citizenship in Basel, a city now situated at the junction of the French, German and Swiss borders. Whilst in Basel, Graf worked as an illustrator for the famous publishers Adam Petri, Jean Froben and Johannes Amerbach, as well as studying the art of glass painting. However, whilst his professional career prospered, his personal life began to fall apart and he was arrested on numerous occasions for ‘wife beating' or ‘consorting with harlots’.

It was about this time that Graf began his parallel career as a reisläufer (Swiss mercenary). He’s known to have fought in Italy [1510], Dijon [1513] and Milan [1521]. He’s also thought to have been present at the Battle of Marignano [1515] which was one of the bloodiest engagements in the long series of wars fought by the French, the Holy Roman Empire, the Venetians and the Papacy for control of Northern Italy. Marignano pitted the famous Swiss pike squares (see panel) against a French army made up of heavily armoured, mounted knights, supported by the largest train of artillery in Christendom, and it was a rare defeat for the reisläufers.

The battle began with Graf and his comrades advancing slowly towards the French. In previous battles this tactic had been highly successful, with the lumbering pike squares sweeping aside any opposition like modern day tanks. However, on this occasion, the presence of so many French cannon turned the tide against the Swiss. The unprecedented hail of French shot smashed into the massed ranks of the reisläufers like a scythe cutting through corn, yet Graf survived and the slaughter inspired one of his most chilling works.

The Battlefield of Marignano depicts the full misery of war; the foreground is a jumble of mangled limbs and severed heads whilst the trees behind are festooned with the corpses of men hanged for desertion. Only someone who’d witnessed these atrocities at first hand could have recorded them in such detail and this graphic violence became regular feature of Graf’s work. Similar works such as The Execution Ground [1512] and Two Prostitutes Beating a Monk also reveal the soul of a man who is deeply troubled.

Between campaigns Graf returned to Basel but, like so many soldiers throughout history, he found he couldn’t adjust to civilian life and in 1518 he was forced into exile after being charged with attempted murder. Fortunately, as his victim survived, Graf was allowed to return to Basel after a year and in 1520 he used some of the loot he’d brought back from the Italian Wars to buy a house called Zur Guldin Rosen (the Golden Rose) which now has the somewhat less romantic address of 18 Stadthausgasse. Unfortunately, despite becoming a man of property and siring a son, he continued to suffer from what we would call Post Traumatic Stress Disorder.

Having failed to settle in his new home, Graf re-enlisted as a mercenary and took part in the Milan campaign of 1521. By the time the fighting was over, he was nearly forty and perhaps his advancing years prompted him to give peace one last chance. His skills as an artist remained undiminished and Graf easily found a job with Basel’s mint designing new coins. He also held prominent positions in the city’s guild of goldsmiths including Kieser (elector) and Stubenmeister (manager) but he frequently ‘fell off of the wagon’ and ended up back in jail.

In 1523 Graf’s fellow guild members successfully petitioned for their colleague to be released from yet another period of imprisonment so he could take part in a shooting contest! Yet even his friends’ loyalty failed to help him find solace. After 1527, Graf’s name disappears from Basel’s records but, whilst some scholars maintain that his absence from the city’s official lists of residents proves he died in this year, his ultimate fate is something of a mystery.

Certainly the long-suffering Sibylla remarried in 1528 but there is a drawing bearing Graf’s distinctive cipher dated 1529. Graf was one of the first western artists to sign and date his work so it’s highly likely that he simply abandoned his wife and son and resumed his life as a mercenary. He may have died on the battlefield, in prison or during a tavern brawl, but, whatever his fate, he left behind an important body of work that is a vital resource for anyone researching life in the early 16th Century. Though Graf’s art may lack the delicate beauty of Botticelli, or the dramatic grace of da Vinci, his drawings are full of the raw vitality of a man who lived his whole life in the shadow of death.