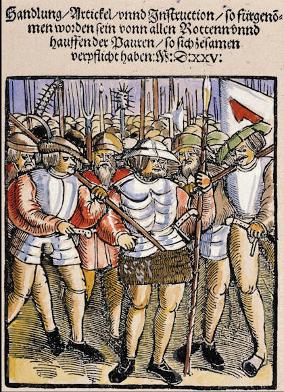 the war of the SNAILS

Though it lasted less than 2 years, The German Peasants’ War has had a lasting influence on history. The Twelve Articles, a document listing the rebels’ grievances and demands, has been described as a model for the American Bill of Rights and the inspiration for the French Revolution whilst Friedrich Engels, Karl Marx’s secretary and one of the founding fathers of Communism, tried to use the war to prove that ‘class struggle’ was part of an inevitable historical process that would lead to world socialism. So what was this bloody conflict that claimed the lives of 100,000 German peasants?

1. The war began with a row over snail shells... – in the summer of 1524 the Countess of Lupfen ordered the 1,200 serfs who lived on her estates to stop tending their crops and collect snail shells to use as spools for her thread. Having suffered several bad harvests in previous years, the peasants faced starvation if they abandoned their fields so they took up arms. The rebels of Lupfen were quickly joined by serfs from neighbouring estates and by the end of the year most of Southern and Central Germany was in open revolt.

2. …and other things - though the shell story may be apocryphal, the peasants of Germany had plenty of legitimate grievances. By the late Middle Ages, the peasants’ ancient rights to bear arms and hunt, fish or chop wood on common land had been severely curtailed so serfs had to work for their increasingly powerful lords or starve. One list of demands circulated early in the rebellion called for the abolition of laws requiring serfs to carry dung for their lord!

3. The rebels used a shoe tied to a pole as their banner –the badge of the unlaced shoe was a popular symbol of revolt that predated the rebellion of 1524. The shoe symbolised the march of the peasantry towards a ‘New Eden’ free of cruel lords and corrupt clergy.

4. Martin Luther condemned the revolt – though many of the rebels were inspired by Luther’s criticisms of the Catholic Church, the founder of Protestantism wanted nothing to do with the revolt. Later, after the massacre following the capture of Weinsberg Castle (see #7), Luther was so appalled at the wanton killing he penned his pamphlet Against the Murderous, Thieving Hordes of Peasants.

5. The war was the first to use propaganda – the growth of printing made it much easier for both sides argue their case. Luther’s Against the Hordes of Peasants was written as a riposte to the rebel manifesto The Twelve Articles of the Christian Union which, besides listing the peasants demands, tried to justify the rebellion through scripture. Interestingly, The Twelve Articles was reprinted 25,000 times in two months which suggests the rebels had a higher standard of literacy than might be expected.

6. One of the peasant leaders was a one-armed bandit who swapped sides – Though Goetz von Berlichingen had lost his right arm during a siege, the fingers of its metal replacement boasted an ingenious array of levers that could hold a sword. This allowed ‘Goetz of the Iron Hand’ to continue his infamous career as a robber baron and though he was a nobleman he led one of the largest rebel armies. Typically, after his defeat at Würzburg Goetz abandoned his men and escaped execution by claiming he’d been forced to join the rebels.

7. The war was characterised by savage atrocities committed on both sides - after the bloody capture of Weinsberg Castle, the peasant leader ‘Little Jack’ Rohrbach executed his noble enemies by forcing them to the run the gauntlet. This shameful military punishment, usually reserved for cowards and deserters, involved the high-born prisoners running between two lines of their captors who beat them to death. When Little Jack was finally arrested he too was executed with extreme cruelty: sentenced to be burned alive, Jack was fastened to the stake by a short length of chain and the firewood arranged in a ring so he could move, but not escape the flames that roasted him slowly to death.

8. Another rebel leader was a religious fanatic who believed the end of the world was nigh - in late 1524 a zealous protestant preacher named Thomas Muntzer founded ‘The Eternal League of God’. The banner of this peasant militia was white flag emblazoned with both a rainbow and the slogan God ‘s Word will endure forever but at Frankenhausen, on the 11th May 1525, Muntzer and his men were slaughtered by an army of well-equipped landsknecht mercenaries who’d been hired by the nobles to crush the revolt. Muntzer was captured, tortured and beheaded but the landsknechts lost just 4 men killed and 2 wounded.

9. Lacking armoured cavalry the peasants were doomed – whilst it’s true that most peasant bands consisted of farmers armed with nothing more lethal than agricultural implements, an exception was the Black Company led by a disillusioned, protestant nobleman named Florian Geyer. Geyer was rich, and had fought against Goetz of the Iron Hand in several feuds, but early in 1525 he recruited a company of knights to fight for Muntzer. Geyer led his men to some success early in the war but he too was captured and executed at Frankenhausen.

10. History is not always written by the winners - though Goetz von Berlichingen, Florian Geyer and Thomas Muntzer were soundly beaten on the battlefield, these rebel leaders have become popular folk heroes. Both Goetz and Geyer have had plays and numerous songs written about them. Geyer also has the dubious honour of having had a Nazi Panzer Division named after him during WWII whilst Muntzer was deified by East Germany’s Communist Party. The rulers of the former DDR commissioned a giant 360o mural to commemorate the Battle of Frankenhausen and this memorial was officially opened on the 14th of September 1989 - just eight weeks before the fall of the Berlin Wall and the collapse of communism!

Panorama of The German Peasants War from the museum at Frankenhausen