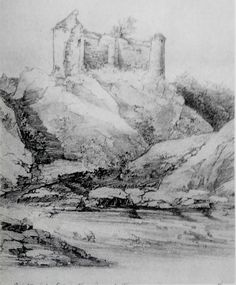 Though there are several Transylvanian castles associated with the fictional Dracula, Romania’s remote Castle of Poenari is the only fortress that has a documented link to the historical Dracula - Vlad the Impaler. What’s more, Poenari’s history is far more blood-curdling than that of the mythical castle inhabited by Bram Stoker’s vampire.

Vlad the Impaler was a scion of the House of Drăculeşti and during the 15th Century he and his kin fought a long civil war with their cousins, the House of Dănești , for the throne of Wallachia (now part of Southern Romania). Though a later chronicle tells us that Vlad built Poenari to be an impregnable refuge to keep his family safe from his numerous enemies, there was a watchtower here in the 13th Century and the site may have been first fortified during the Byzantine period or even earlier.

Certainly this is the perfect place for a castle. Perched on a pinnacle of rock more than 1,000 feet high, Poenari overlooks a narrow ravine cut by the River Arges and there may have been two castles, one on each side of the river, guarding this strategic pass through the Făgăraș Mountains. Of the castle on the right bank, if it ever existed, nothing remains and local lore insists that both fortresses were destroyed during a raid by Crimean Tartars sometime around the end of the 14th Century.

According to the story, monks from the nearby monastery of Curtea de Arges had sought sanctuary in Poenari and/or its sister castle but fled through a secret tunnel when the Tartars were seen approaching. Denied their prize, the Tartars, destroyed the deserted fortresses and they lay ruined and forgotten until Vlad the Impaler passed by on his way into exile. Vlad realised the site’s military value, and he devised an ingenious plan to have at least one of the castles rebuilt, but it would be almost ten years before he could put his diabolical scheme into practice.

Though Vlad’s father (Vlad II) and elder brother (Mircea) had ruled Wallachia since seizing the throne in 1436, both men were deposed and murdered by boyars (noblemen) who supported the rival House of Dănești. Vlad’s father was merely stabbed to death but Mircea was blinded with red hot pokers before being buried alive. Somehow Vlad (now Vlad III) managed to escape abroad but when he learned exactly how his brother had died he swore vengeance.

It took a decade for Vlad to defeat his enemies but by 1457 he had reclaimed the Wallachian crown for the Drăculeşti. In the spirit of reconciliation, he invited the surviving boyar rebels to an Eastertide banquet to be held in the royal city of Târgoviște and two hundred boyars attended with their families. Dressed their finest clothes, the lords and ladies gorged themselves on the fine dishes served by their host but Vlad had not forgotten his vow.

At the height of the feasting, he asked each of his guests how many different princes had they served? One man answered thirty, another twenty and even the youngest confessed to having served seven different rulers. At this Vlad cried that Wallachia had been cursed with so many princes because of the boyars’ “shameful intrigues” and he gave the signal for his men to arrest everyone present. The older Boyar noblemen were immediately impaled whilst their young wives and daughters were given to the common soldiery but an even worse fate awaited those deemed to healthy enough to work.

Still wearing their finery, the boyar noblemen and boys were shackled together and marched to Poenari, fifty miles away. Here they were ordered to rebuild the dilapidated castle within two years or be impaled. A Roman chronicle written a little while later records that the prisoners were starved, beaten and forced to work naked when their clothes rotted off their backs.
Whether Vlad kept his word once the castle was finished is not recorded but the emaciated survivors, if any, must have been proud of their work. Poenari is not a large fortress but its keep, walls and towers were strong enough to withstand all but the largest cannon. Thanks to its mighty ramparts, and the sheer cliffs on all sides but one, the castle was only vulnerable to a prolonged siege yet it failed to provide the refuge for his family that Vlad had intended.

By 1462, Vlad’s legendary cruelty and refusal to pay tribute to the Ottoman Sultan Mehmed II had had led to an unholy alliance between the ever rebellious boyars and the Turks. Despite defeating a large Turkish army marching on his capital in the so called Night Attack, Vlad was forced into exile and his wife became trapped in Poenari. At first there seemed to be no cause for alarm, as the castle’s walls could easily withstand a direct assault, but the Turks began secretly hauling cannon to the top of the hill on the opposite side of the gorge and from that position they could batter Poenari into submission.

Seeing the danger, a slave in the Turkish camp, who was related to Vlad, decided to try and to warn his cousins. This man managed to escape from his masters and scale the cliffs below Poenari to a point where he could fire an arrow, with a message attached, through an open window. The arrow found its mark, blowing out a candle as it landed, and when its flame was rekindled the slave could see Vlad’s wife reading the message. Unfortunately Vlad’s hapless spouse did not know about the secret passage and after telling her maid that she’d rather be eaten by fish than sent to a Turkish harem she leapt from Poenari’s highest tower and plunged into the river below.

Though Vlad later remarried, and briefly reclaimed the throne in 1476, he too was assassinated and his Castle of Poenari was partially dismantled. By the late 15th Century the keep had been turned into a prison and the last record of Poenari being used militarily occurs in 1522 when the area’s governor used it as base to suppress a revolt of local serfs. Poenari was finally abandoned in the 17th Century and over the years much of its stone was pillaged by local villagers. More damaged was caused by earthquakes and in 1888 most of Poenari’s north wall crashed into the river, yet what remains is still impressive.

In recent years the Romanian Tourist Authorities have built 1,480 steps to help intrepid visitors reach the castle’s entrance. Now fans of Dracula, both real and mythical, can truly follow in the blood-soaked footsteps of Vlad the Impaler.
A shorter version of this post appeared on my Facebook page: thedevilstonechronicles

Back to Historical Background Page