"IN THE ARSE IT’S BLACK" – THE CURIOUS CONNECTION BETWEEN HENRY V, COUNT DRACULA & the order of the dragon 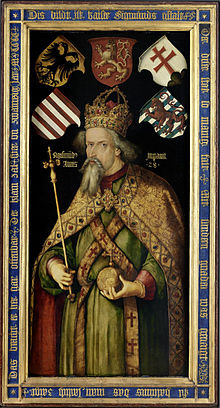 Sigismund as Holy Roman Emperor painted by Albrecht Durer in 1437 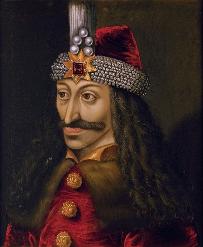 16th Century portrait believed to be of Vlad III the Impaler now in Ambras Castle, Innsbruck 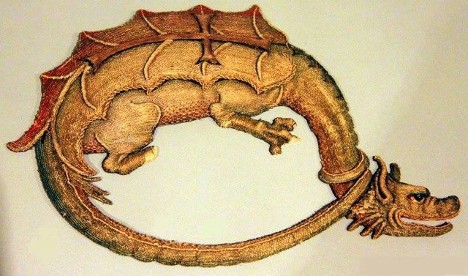 On display in the Tower of London’s Royal Armouries museum is a rare medieval saddle (catalogue number VI.95). This beautiful object is made of wood inlaid with bone panels decorated with dragons and three mottoes written in the Gothic script of Southern Germany.

• Right Panel: I hope the best fortune may attend you
• Left Panel: Help God! Forward in the name of St George
• Rear Panel: In the arse it’s black

The meaning of this last statement is obscure (to say the least!) but, according to tradition, this exquisite saddle was presented to Henry V by Sigismund King of Hungary during his state visit to England in 1416. But what was a King of Hungary and future Holy Roman Emperor doing in London?

The destruction of the French king’s army at Agincourt had made Henry V the most powerful Christian monarch west of the Rhine and Sigismund wasted no time in trying to enlist the victorious King of England’s support for his own struggles. Henry was equally glad to have an ally who could threaten France's eastern border if necessary and as a gesture of their mutual friendship, Sigismund was made a Knight of the Garter whilst Henry was inducted into Hungary’s Order of the Dragon. To celebrate the English king becoming a 'Draconist', Sigismund presented Henry with the aforementioned saddle but what was the Order of the Dragon?

Sigismund had founded his new order of chivalry in 1408 so as to combat two perceived threats to his crown. These were the Christian heretics of Bosnia, known as Bogomils, and the rapidly expanding Islamic empire of the Ottoman Turks. Sigismund hoped that Henry and other foreign princes inducted into the order would provide him with the men and money he needed for a new crusade against these ‘perfidious enemies of Christ' and, like previous crusading orders, members took an oath to fight 'under the banner of The Cross'.

In homage to the Knights Templar and Knights Hospitaller, who wore the Sign of The Cross as a symbol of their oaths, so the edict establishing the Order of the Dragon decreed that all members must wear the badge of a white dragon, with a red cross on its back, being attacked by its own tail. The red cross represents Christ’s resurrection, as well as the dragon-slaying St George, and the imagery of rebirth is repeated in the strange pose of the self-strangling dragon. This ancient symbol, called the ‘Ouroboros’ by medieval alchemists, represented the endless cycle of creation and destruction as well as life, death and despair.

Sadly the element of this magical device representing despair proved all too prophetic and the Draconists not only failed to keep the Ottomans out of The Balkans, they failed to prevent the destruction of Hungary itself. The premature death of Henry V in 1422 reignited the bitter Hundred Years War and the subsequent fighting ended Sigismund’s dream of leading a united Anglo-French-Hungarian crusade against the Turks.

In desperation, Sigismund tried to win more allies by expanding the Order of the Dragon. Between 1431 and 1437, he invited the princes of Wallachia (modern Romania), Bulgaria, Croatia and various Italian city states to take the Draconist oath but it was all to no avail. Sigismund died in 1437 and though his successors eventually launched the long planned attack on the Ottomans, the new crusaders were crushed at the Battle of Varna [1444].

After the Hungarians' defeat, the Ottoman Sultan Murad II and his son Mehmed II quickly conquered Constantinople, Serbia, Bosnia, Albania, Wallachia, Moravia and the Peloponnese. Finally, 82 years after Varna, Sultan Suleiman the Magnificent added most of Hungary to the Ottoman Empire following the equally decisiveBattle of Mohacs [1526].

In the years following the collapse of the Christian east, the original Order of the Dragon was disbanded and largely forgotten but its name lived on in the unlikely form of one of the most famous names in Gothic literature. In 1431, both Vlad II Voivode (prince) of Wallachia and his infant son Vlad III were both inducted into the Order of the Dragon and in honour of their initiation, Vlad adopted the epithet Dracul (meaning dragon) whilst his heir became Dracula (son of the dragon). Later Vlad III was given another nickname Tepes (the Impaler) thanks to his infamous method of executing his opponents.

Though Henry V was long dead by the time Vlad the Impaler started skewering his prisoners, it’s amazing to think that England’s most famous medieval king and the man who inspired Bram Stoker’s legendary vampire Count Dracula were both members of the same order of chivalry!

To read the full text of the Draconist Oath click here