The Battle of Mohacs forms the climax to The Devil's Lance (Volume 2 of The Devilstone Chronicles) but what causedthis bloody conflict that destroyed the once powerful kingdom of Hungary? 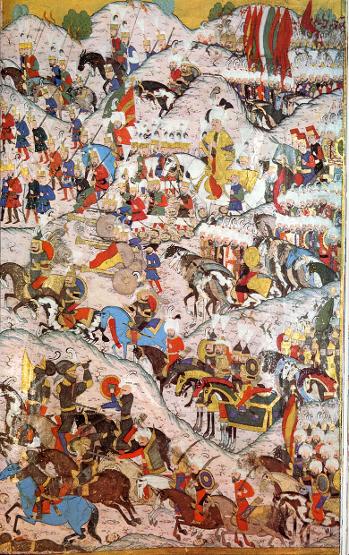 Above: Ottoman miniature depicting the battle.

Below: five maps explaining the battle (click on a map to open)

The root cause of the battle was the ambition of three men: Charles V (King of Spain, Germany, Italy & Holy Roman Emperor), Francis I (King of France) and Suleiman the Magnificent (Sultan of the Turkish Ottoman Empire). These three monarchs were locked in a titanic struggle for control of Europe with Francis fighting Charles in the west over Italy and the Low Countries (the Italian Wars) and Suleiman fighting Charles in the east for control of the Danube Valley and the Balkans (the Ottoman-Hapsburg Wars).

During the early years of the 1520s, Suleiman had driven the Hospitaller Knights of St John from the Island of Rhodes and conquered Serbia. Now the capture of King Francis at the Battle of Pavia [1525] offered him the chance to extend the Ottoman Empire deep into Central Europe.

With her son a prisoner and France desperate for allies after Pavia, the French king's mother, Louise of Savoy proposed an alliance with the Ottomans that would force Charles to fight on two fronts. Suleiman readily agreed to this secret pact and on the 16th of April 1526, three weeks after Francis had been released from his captivity, he launched his invasion of Christian Hungary.

Unfortunately for the Hungarians, their kingdom stood between Suleiman and his ultimate goal of Vienna and to make matters worse the nineteen year old King Louis II, was in no position to fight off a determined attack by a mighty empire.

Decades of civil war had weakened the Hungarian monarchy to such a point that, when Louis called a muster of his feudal army for the 2nd of July 1526, nobody, not even the king, bothered to turn up! It was only after the Turkish army had crossed the River Drava that the Hungarian nobility were spurred into action.

In late August 1526, 25,000 armoured knights and feudal levies, together with a large number of Spanish, German, Italian and Balkan mercenaries assembled a few miles to the south of the village of Mohacs. Facing them across an open yet boggy plain on the left bank of the Danube were up to 100,000 men of not one but two Ottoman armies: the Rumelian and the Anatolian.

Despite some early success and the peerless courage of the Hungarian soldiery, the Ottoman's superior numbers proved to be decisive. The Hungarian cavalry was routed (with King Louis and most of his nobles killed during their flight from the battlefield) and the infantry massacred to a man.

The annihilation of the Hungarian army opened the way to Vienna and even though Suleiman failed to conquer the Hapsburg's Austrian capital, Hungary ceased to be an independent kingdom. Ironically, the defeat at Mohacs allowed the Austrian Hapsburgs to expand their dominions into northern Hungary (which became known as Royal Hungary) whilst the south of the country became an Ottoman vassal until the creation of the Austro-Hungarian Empire in the 18th Century. 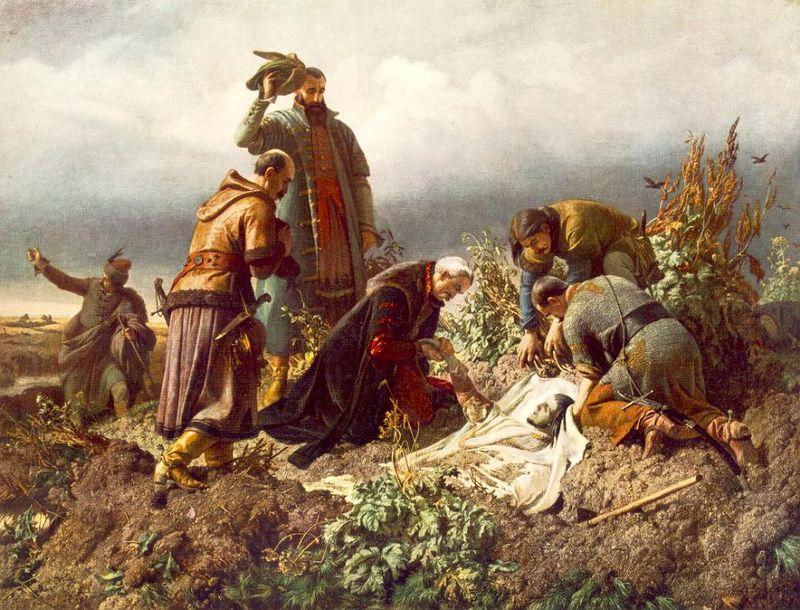 Discovery of Louis II's corpse after the Battle of Mohacs