WHAT HAPPENED TO THE HOLY LANCE USED IN THE CRUCIFIXION?

The Crucifixion with the Madonna, St John the Evangelist and St Longinus,  French School, 17th Century.

Throughout the Middle Ages, the Kings of France, the Holy Roman Emperors and the Ottoman Sultans all claimed to have in their possession the spear that pierced Christ's side as he hung on the cross.

According to the Gospel of St John, when the centurion thrust his lance in the the flesh  of Jesus to prove that he was dead, blood and water flowed from the wound thus signifying that Christ was both entirely human (the blood) and entirely divine (the water). This miracle supposedly gave the relic enormous power. Moreover, as Jesus ascended to heaven leaving nothing of his mortal body behind (unlike other saints) any item that had touched the incarnated flesh  of God was regard as especially holy.

As a result, the Holy Lance attracted an enormous number of legends and here are just a few...

The first non-biblical reference to the Holy Lance occurs in the writings of Antoninus of Piacenza. Antoninus made a pilgrimage to Jerusalem c.570AD and he wrote a journal in which he describes the relics on display in the Holy Land. In particular, Antoninus boasts that he saw the Holy Grail in the Church of the Holy Sepulchre and the Holy Lance in the Basilica of Mount Zion.

In 615AD Jerusalem was conquered by the Persian King Chosroes II and the contemporary Greek chronicle, the Chronicon Paschale, tells us that the Holy Lance was broken in two with its tip being taken to Constantinople. When the Byzantine capital was captured by Frankish crusaders in 1204, the tip of the lance was sold to the French King Louis IX, who placed it in the Sainte Chappelle in Paris, but this portion of the Constantinople lance vanished during the French Revolution.

As for the rest of the lance, there is a brief reference to it by a 7th Century pilgrim named Arculpus, who records that the larger section of the broken spear had survived the conquest of the Holy Land by the Arabs and was still in the Church of the Holy Sepulchre. There is also a legend from the First Crusade’s Siege of Antioch [1098] which states that a monk named Peter Bartholomew discovered the Holy Lance buried beneath the aisle of the city’s Church of St Peter.

The monk’s revelation rallied the starving crusaders who duly defeated their Saracen enemies but Peter had to undergo the terrible ‘Ordeal by Fire’ before he was believed. The Antioch spear also ended up in Constantinople but other than these somewhat fanciful tales, there is no mention of the relic until after the Byzantine capital had been captured by the Ottoman Turks.

In 1492 the Turkish Sultan Bayezid II sent a broken spearhead purporting to be the Holy Lance to Pope Innocent VIIII. This gift was actually a bribe to ensure that the pope continued to keep a rival claimant to the Ottoman throne a prisoner in Rome. During the 16th Century the sultan’s gift was placed in the pedestal of Bernini’s giant statue of St Longinus, who according to a medieval tradition was the Roman centurion who wielded it.

This broken spear is still in St Peter’s however there is a rival Holy Lance on display in Vienna. The Viennese relic, which is also known as the Spear of Destiny, is decorated with a nail welded to the centre of its long, leaf-shaped blade and is wrapped in a gold sleeve inscribed with the words this is the LANCEA ET CLAVUS DOMINI (the lance and nail of The Lord).

According to legend, after the death of St Longinus, this lance was carried by St Maurice, who was another roman centurion who converted to Christianity. Maurice, though a Nubian from the far south of Egypt was martyred in what is now Switzerland where his armour and weapons were miraculously discovered by the future Roman Emperor Constantine the Great. Constantine not only wielded the lance at the Battle of Milvian Bridge, in which he defeated his rival Maxentius, he used the tip to mark out the boundary of Constantinople, his new capital on the Bosporus.

The numerous legends attached the Viennese lance insist that this weapon was wielded by everyone from Alaric the Goth to Attila the Hun, who all coveted the relic’s miraculous power to ensure victory in battle, before it passed to the great warrior king of the Franks Charlemagne. Einhard, Charlemagne’s biographer, records that his master kept the Holy Lance always within reach and that his death was foretold when he accidentally dropped the precious relic after his horse shied at the sight of a comet.

The mythology surrounding the Viennese spear also became entwined with the legends of King Arthur. The medieval poem by Wolfram von Eschenbach declares that the Holy Lance was kept in the Grail Castle and guarded by the Fisher King whilst the English chronicler William of Malmesbury [1095-1143] insists that the Holy Lance was once in the care of the Saxon king Athelstan.

Legend aside, history records that the Viennese lance was acquired the Holy Roman Emperor Otto the Great [912-973]. In 1000AD, Otto I’s successor Otto III gave a copy of the lance to his ally Boleslaw King of Poland and in 1084, Henry IV added the nail and a silver band. The spear was incorporated into the coronation regalia of the German Holy Roman Emperors in 1273 and the Emperor Charles IV added the gold sleeve around 1350.

As the vast, sprawling Holy Roman Empire lacked a central capital, the relic was kept in several cities during the Middle Ages but in 1424, the Holy Lance was given a permanent home in Nuremberg, where it became the star of the annual Good Friday parade of religious and secular treasures known as the Heiltumsweisungen. The Imperial regalia remained in their Nuremberg monastery until 1806 when the Holy Lance and the other treasures were moved to Vienna to keep them safe from Napoleon.

The Holy Lance was kept in the Imperial Treasury of the Austrian Hapsburg emperors until 1938 when it was briefly returned to Nuremberg following Nazi Germany’s annexation of Austria. Hitler’s insane henchman Himmler tried to make the Viennese lance the centre of an SS cult that welded Nazi ideology to Arthurian legend but his plans came nothing and after WWII the lance was found in a vault underneath Nuremberg’s imperial castle. This ancient spear was returned to Vienna, in person, by General George S Patton and it is now back on public display in the city’s Hofburg Palace.

So which relic is the real Holy Lance? The Catholic Church makes no claims about either and whilst a 2003 test of the Viennese lance found that the blade was probably made in around 650AD, the nail embedded in the iron is consistent with the size and shape of a Roman nail from the time of The Crucifixion…

Back to Historical Background 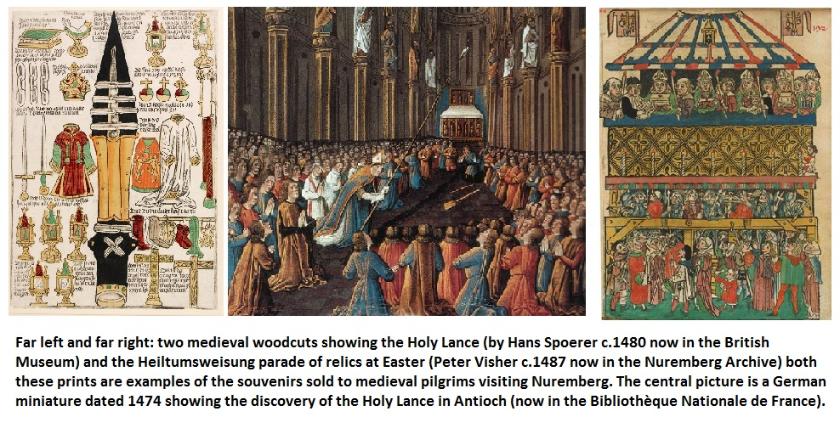 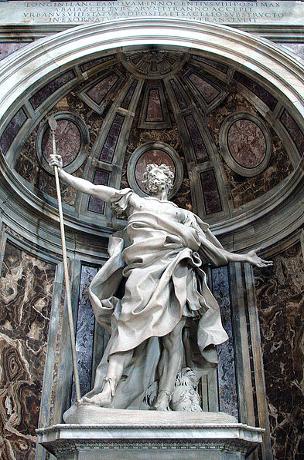 The Viennese Lance now in the Hofburg Palace Museum Vienna