truly this man is the son of god

the story of st longinus

as told in The Golden Legend of Jacobus Voraligne 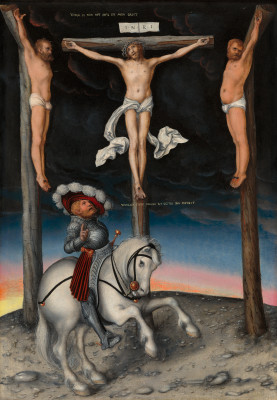 Saint Longinus depicted as a 16th Century Landsknecht mercenary in The Crucifixion with the Converted Centurion by Lucas Cranach the Elder, painted in 1536, now in the  National Gallery of Art, Washington DC.

The text, in German, reads wahrlich dieser mensch ist gottes son gewest - truly this man was the son of  God

About the Author of The Golden legend

Born c.1230, the Blessed Jacobus da Voragine (real name alternatively spelt: Jacopo De Fazio, Giacomo da Varazze and Jacopo da Varazze) rose to be archbishop of Genoa during his lifetime but today  he is best known as the author of an extremely popular medieval hagiography called the Legenda Aurea (The Golden Legend).

Originally written in Latin, and published c.1260 in manuscript form, this medieval bestseller was one of the first works to be printed when moveable type arrived in Europe during the 1450s and until the start of The Reformation, it outsold all other works including the Bible.

The Life of St Longinus is typical of Voragine's treatment of a saint's biography. None of the canonical gospels name the Roman centurion who pierced Christ's side with a spear or give any details of this soldier's life afterwards. By contrast, it is these gaps in the saint's history that interests Voragine.

It is Voragine, quoting from the apocryphal Gospel of Nicodemus who tells us that the centurion is called Longinus, and it is he who tells us how this grizzled veteran's life was changed forever by the small part he played in The Crucifixion.

Here then is the somewhat fanciful Life of St Longinus as described by the Blessed Jacobus  of Voragine...

Longinus, which was a puissant [strong] knight, was with other knights, by the commandment of Pilate, on the side of the cross of our Lord, and pierced the side of our Lord with a spear; and when he saw the miracles, how the sun lost his light, and great earthquaving [sic] of the earth was, when our Lord suffered death and passion in the tree of the cross, then believed he in Jesu Christ. Some say that when he smote our Lord with the spear in the side, the precious blood avaled by the shaft of the spear upon his hands, and of adventure with his hands he touched his eyes, and anon he that had been to-fore blind saw anon clearly, wherefore he refused all chivalry and abode with the apostles, of whom he was taught and christened, and after, he abandoned him to lead an holy life in doing alms and in keeping the life of a monk about thirty-eight years in Cæsarea and in Cappadocia, and by his words and his example many men converted he to the faith of Christ.

And when this came to the knowledge of Octavian the provost, he took him and would have constrained him to do sacrifice to the idols, and S. Longinus said: There may no man serve two lords which be contrary to other; thine idols be lords of thy malices, corrupters of all good works and enemies to chastity, humility and to bounty, and friends to all ordure of luxury, of gluttony, of idleness, of pride and of avarice, and my Lord is Lord of soberness that bringeth the people to the everlasting life.
Then said the provost: It is nought that thou sayest; make sacrifice to the idols and thy God shall forgive thee because of the commandment that is made to thee. Longinus said: If thou wilt become Christian, God shall pardon thee thy trespasses. Then the provost was angry, and made the teeth of S. Longinus to be drawn out of his mouth, and did do cut his mouth open.

And yet for all that Longinus lost not his speech, but took an axe that he there found, and hewed and brake therewith the idols and said: Now may we see if they be very gods or not. And anon the devils issued out and entered into the body of the provost and his fellows, and they brayed like beasts and fell down to the feet of S. Longinus and said: We know well that thou art servant unto the sovereign God.

And S. Longinus demanded of the devils why they dwelled in these idols, and they answered: We have found place in these idols for us, for over-all where Jesu Christ is not named ne his sign is not showed, there dwell we gladly; and because when these paynims [unbelievers] come to these idols for to adore and make sacrifice in the name of us, then we come and dwell in these idols, wherefore we pray thee, man of God, that thou send us not in the abysm of hell.

And S. Longinus said to the people that there were: What say ye: will ye have these devils for your gods and worship them or have ye liefer [rather] that I hunt them out of this world in the name of Jesu Christ? And the people said with a high voice: Much great is the God of Christian people, holy man, we pray thee that thou suffer not the devils to dwell in this city. Then commanded S. Longinus to the devils that they should issue out of these people, in such wise that the people had great joy and believed in our Lord.

A little time after the evil provost made S. Longinus to come to-fore him, and said to him that all the people were departed, and by his enchantment had refused the idols; if the king knew it he should destroy us and the city also.
Aphrodisius answered: How wilt thou yet torment this good man, which hath saved us and hath done so much good to the city? And the provost said: He hath deceived us by enchantry. Aphrodisius said: His God is great and hath none evil in him. Then did the provost cut out the tongue of Aphrodisius, wherefore S. Longinus signed unto God, and anon the provost became blind and lost all his members.

When Aphrodisius saw that, he said: Lord God, thou art just and thy judgment is veritable. And the provost said to Aphrodisius: Fair brother, pray to S. Longinus that he pray for me, for I have done ill to him, and Aphrodisius said: Have not I well told it to thee, do no more so to Longinus: Seest not thou me speak without tongue?

And the provost said, I have not only lost mine eyes, but also my heart and my body is in great pain. And S. Longinus said: If thou wilt be whole and guerished [healed] put me appertly to death, and I shall pray for thee to our Lord, after that I shall be dead, that he heal thee. And anon then the provost did do smite off his head, and after, he came and fell on the body of S. Longinus and said all in weeping, Sire: I have sinned; I knowledge and confess my filth, and anon came again his sight, and he received health of his body and buried honorably the body of S. Longinus.

And the provost believed in Jesu Christ and abode in the company of Christian men, and thanked God, and died in good estate. All this happed in Cæsarea of Cappadocia to the honour of our Lord God, to whom be given laud and glory in secula seculorum.

Go to The Life of St Maurice page

Back to Historical Background 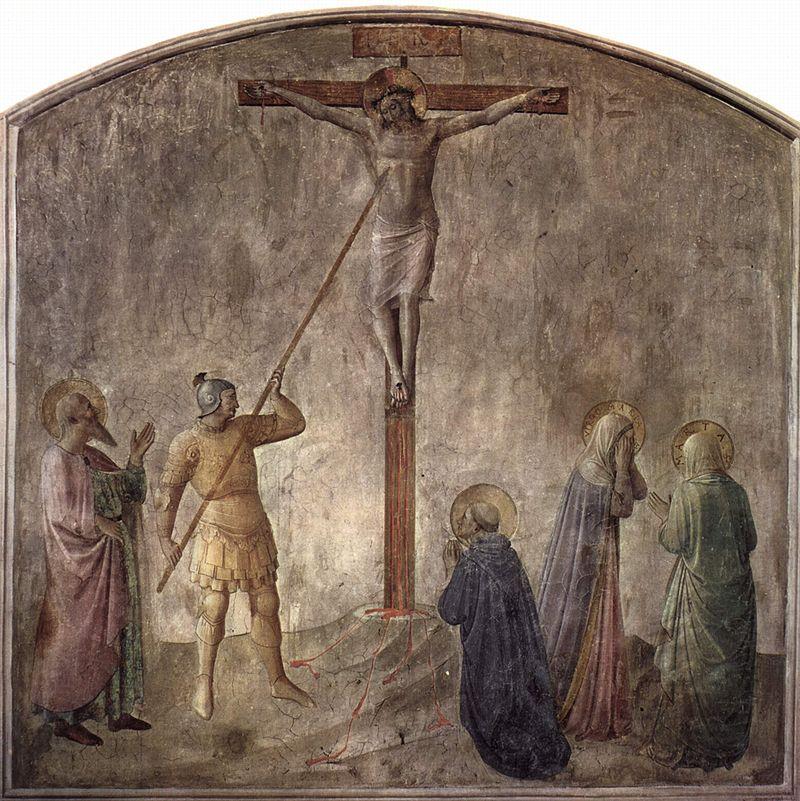 Fresco by Fra Angelico depicting The Crucifixion and the Piercing of Christ's Side by Saint Longinus,

painted c.1437 for the Church of San Marco Florence