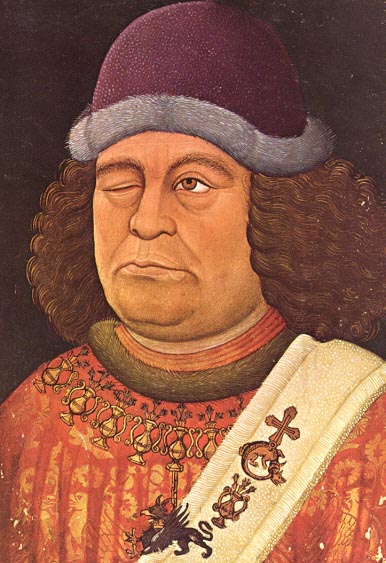 Oswald von Wolkenstein, a Tyrolean nobleman inducted into the Order of the Dragon after its expansion  in 1431. As per his oath, he wears the Ouroboros badge and this is one of the earliest depictions of the Draconist insignia.

In company with the prelates, Lords and Princes of our kingdom whom we invite to participate with us in this society, by reason of the sign and effigy of our pure inclination and intention to crush the pernicious deeds of the same Perfidious Enemy, and the followers of pagan knights, schismatics and other nations of heretical faiths, and those envious of the Cross of Christ, and of our kingdoms, and of his holy and saving religion of faith, under the banner of the triumphant Cross of Christ.

We also swear to serve, in perpetuity, the true heirs and descendants of Sigismund, by the grace of God King of the Magyars and Holy Roman Emperor, and we the faithful Lords and Princes of his kingdom shall at all times bear and have, and do choose and agree to wear and bear, in the manner of our society, the sign or effigy of the Dragon and the effigy shall be incurved into the form of a circle, its tail winding around its neck, divided through the middle of its back along its length from the top of its head right to the tip of its tail, with its blood a Rose Cross flowing out into the interior of the cleft by a white crack, untouched by blood.

Just as, and in the same way, that those who fight under the banner of the glorious martyr St George are accustomed to bear a red cross on a white field, those who now draw near must so swear to uphold the honour and dignity of our society and keep its laws until the last drop of their blood is drained from their body.